Why I purchased Nexus 7 instead of Samsung Tab2

By Unknown August 03, 2012
Introduction
Google also entered the tablet market with its latest device ‘Nexus 7’; in this space Samsung has already been playing a greater role. This post will talk about different streams for thoughts that were running on my mind while I decided to buy a decent tablet for myself.
UPDATE: Do check out Samsung Tab 2 and Google Nexus 7 benchmarking results which talks in details about CPU, memory performances, and web rendering on both the tablets. 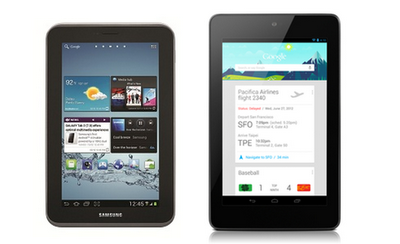 This is not a technical comparison where you see the specifications of two devices and where it stands; rather this will focus on the thought process that goes behind the scenes when you choose to buy one tablet out of two options. If are right now thinking of buying yourself a tablet than this is going to be of great help to you, it will help you know other things to think about while purchasing a tablet and how not just make your decisions purely on the specifications.
Before we proceed further into the thought process let me make it clear the two devices we will be talking about, The first one is of course Google’s own  Nexus 7 and other being Samsung Galaxy Tab 2 (the 7 inch one). Since I am from India, the amount consideration will be in Indian Rupees. So let me bring forward the thought process behind my choice of Google Nexus 7, the tablet I bought.

Why not Samsung Galaxy Tab 2 (7.0)
These were my thought while I purchased a Nexus 7 tablet for me. Are you a Samsung fan? What’s your take on the stuff I explained here? Hit me with comments and I’ll be happy to answer or reply to any queries you might have.

Popular posts from this blog

How to view Removed OR Private pastes on Pastebin?

By Unknown April 24, 2015
If you are a "Pastebin" surfer, you may come across private or removed pastes. These are the pastes which are removed by pastebin, or user marked them as a private paste. Pastebin lists following message for such pastes: "This paste has been removed!" or "This is a private paste. If you created this paste, please login to view it." Viewing removed or private pages To view these pastes: Drag the following bookmarklet into your bookmarks bar. View Cache Open the private or removed pastebin page. Press the bookmarklet ' View Cache '. The page will open and you'll be able to see its contents. NOTE: Do make sure you enable your Bookmark Bar in chrome before adding. How it works? This bookmarklet opens the cached version of the page from Google servers. PRO TIP: You can use this bookmarklet to view other sites as well, pages which are blocked by your company, school etc.
Read more

By Unknown June 01, 2010
Wow, what a title! Well actually that's not possible. The only reason I used this title is - in this tutorial we will be using .cer certificate and will be converting it to .pfx certificate which will then be used on our phone. (Experience free call to US and Canada visit How to use Gmail Call features outside US ) I have gone through a lot of pages saying that certificates problem with Android OS, how to use WPA2 Enterprise secured network on Android, how to add .cer files to android and many more. I have found solutions to some problems somewhere on the internet, but didn't found all the related information at a single place. So I thought of writing this blog entry dedicated to adding certificates for WPA2 Enterprise secured network. Please note that I have a HTC Hero (GSM) which is having Android OS 1.5 (Yes I resisted myself from rooting it with 2.1, but the official update is coming soon). I will update this entry when I’ll get my hands on Android 2.1 UPDATE: For in
Read more

By Unknown May 04, 2009
Disclaimer: Please note that this article is for information purposes only. Please use this method only for testing purposes. If you want to use full capabilities of software after the trial period, please purchase ‘em. UPDATE (Want to use your favourite applications without Administrator rights… read my latest blog post Web Hosted Applications to find out more ways to run your applications without admin privileges) (Want to Install/Use your favorite applications but do not have administrator privileges to do that… Then please read http://abtevrythng.blogspot.com/2009/08/using-installing-applications-without.html for a workaround) (Experience free call to US and Canada visit How to use Gmail Call features outside US )   Many times we use software that are bound to be used only for limited period, trial versions are available which let users use fully functional software on trial basis for a limited period of time (like 15 days trial) OR in some cases trial versions come
Read more